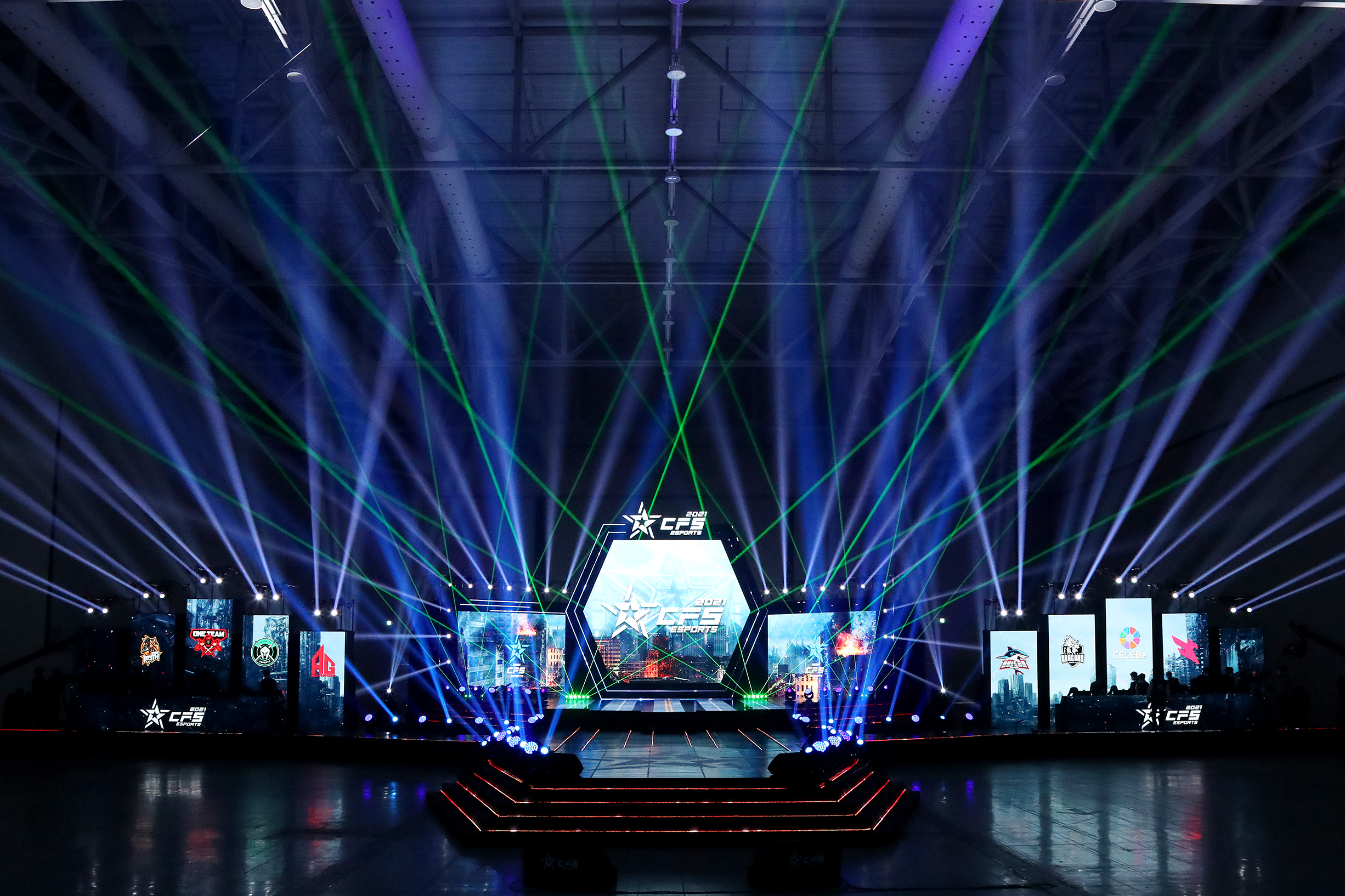 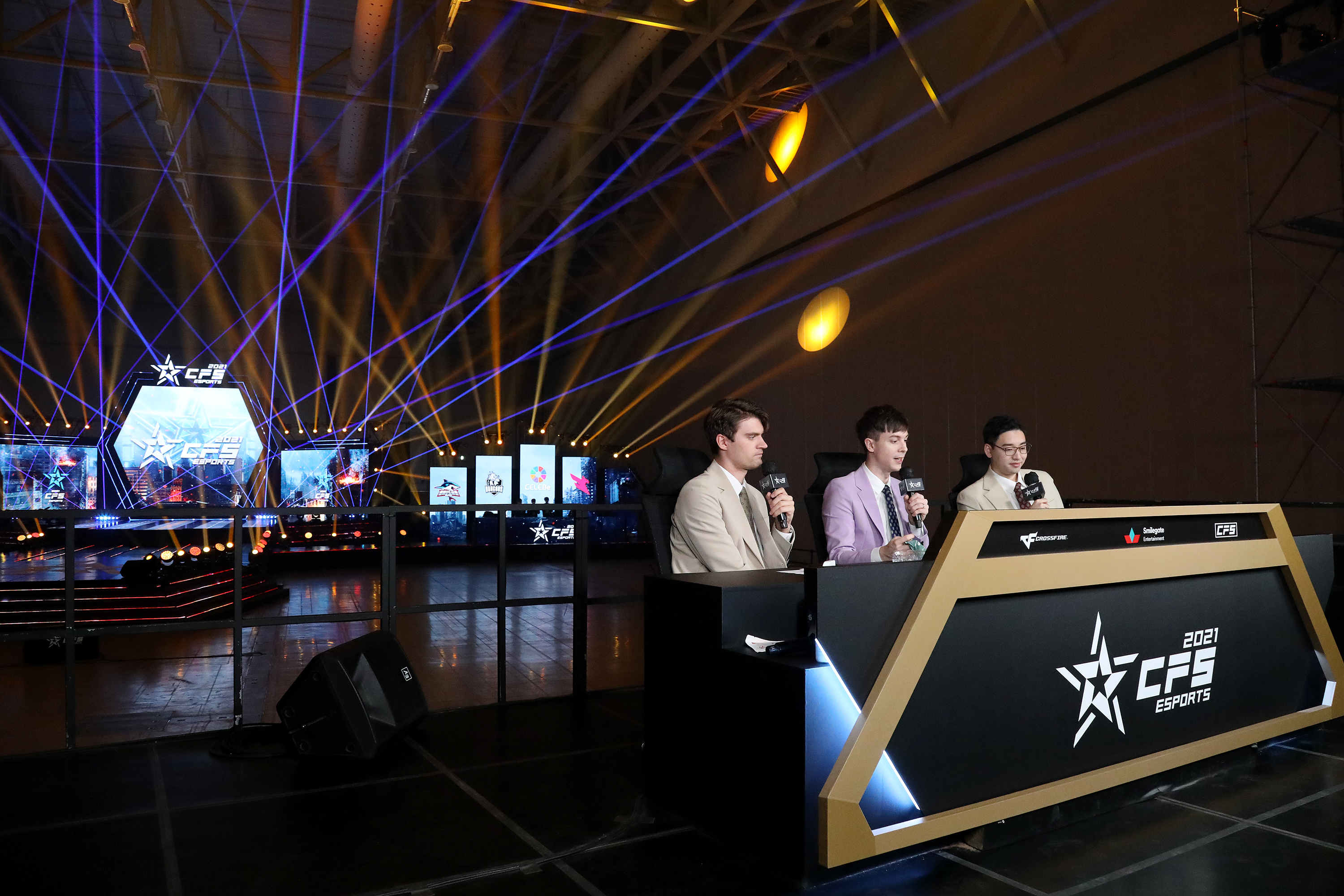 The 4th day of the CFS 2021 Grand Final finished today.
At the same time, 2 teams have finally been selected to face off Grand Final Match.
Who came to the final stage after a tough battle during 4 days? You can check and see more how each game went through with their final match scores and MVP information through the following images. 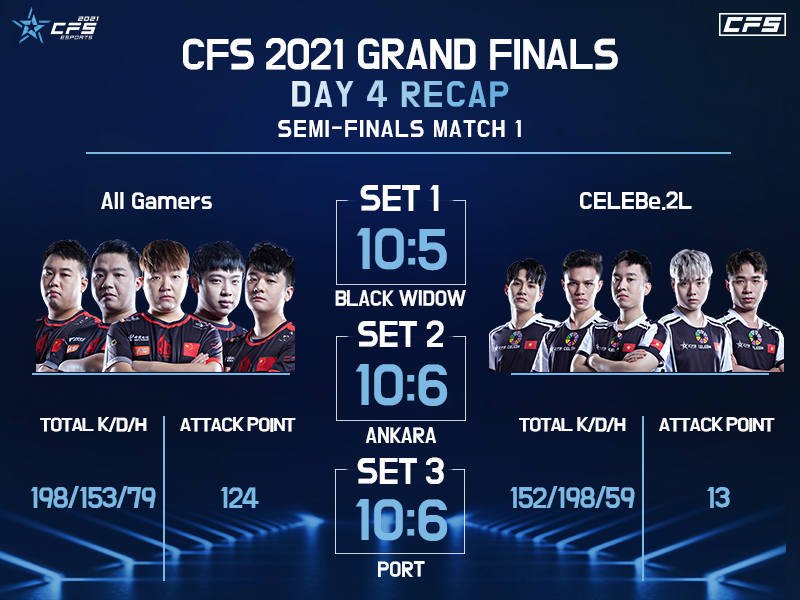 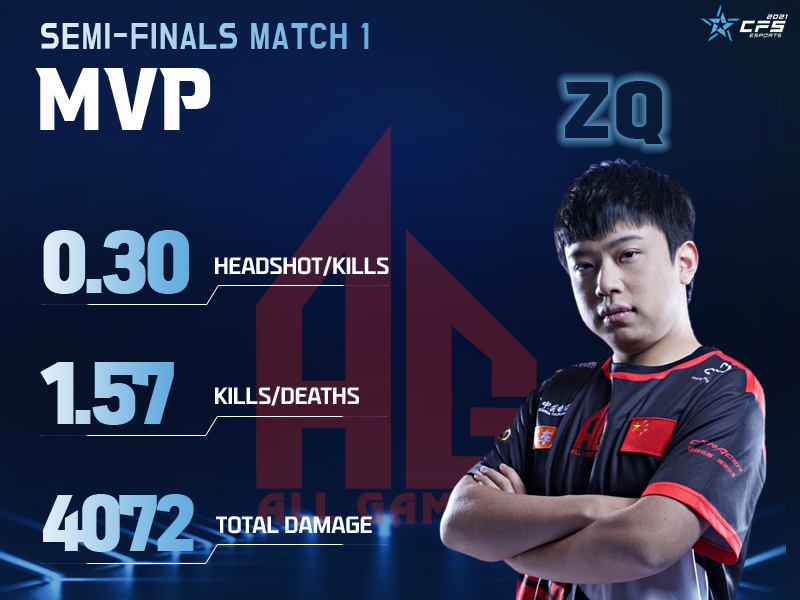 The long-awaited 1st semi-final began on the Black Widow. From the beginning, the 2 teams played and fought fiercely. Especially CELEBe.2L showed their tremendous skills and began to threaten All Gamers. But on the contrary, All Gamers who is a strong candidate for the champion title was managed the game and took the temp from their opponent and took the 1st half with a 5-4 score. In the 2nd half, All Gamers took full momentum during the battle. They rapidly began their aggressive attack ply and took the 2nd half with a score of 10:5 in an instant.

The 2nd set started on the Ankara. All Gamers continued their momentum in the 1st set and easily took the 1st half with a 6:3 score. The 2nd was not much different from the 1st set. CELEBe.2L also did their best even though they pushed back by strong momentum of their opponent. But eventually All Gamers took the 2nd set with a score of 10:6. The 3rd set on the Port was a really went to tight game from the start. The 2 teams did not want to give up a round to their opponents easily. And All Gamers showed a slightly more outstanding strategy that their opponent and took the 1st half with a score of 5-4. Both teams showed great skills during 2nd half. Finally, All Gamers continued to perform well with showing fierce play during the whole battle and successfully got the 3rd set with a score of 10:6. 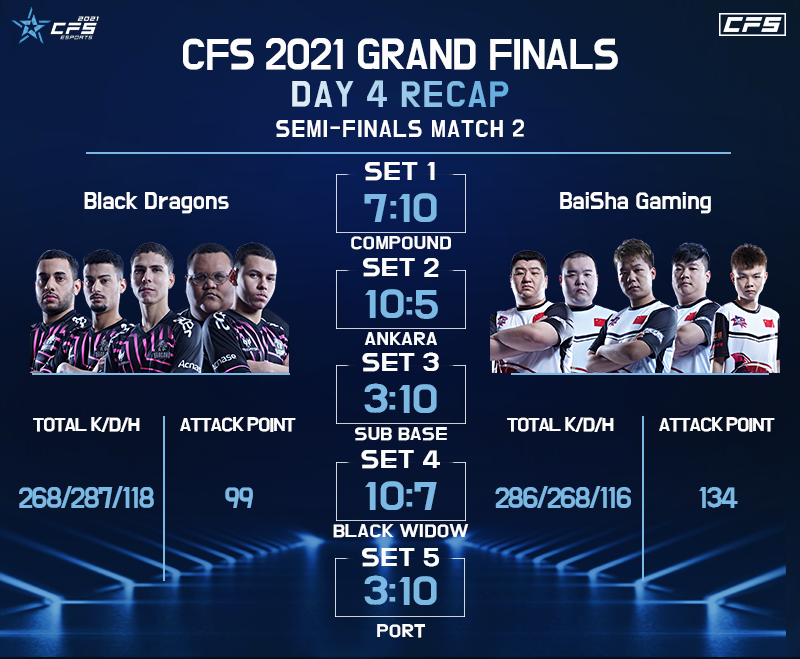 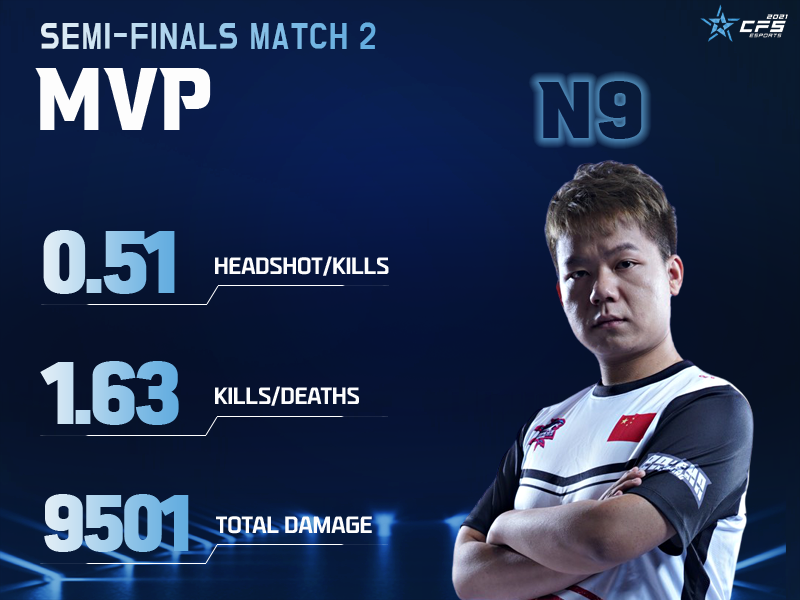 The 1st set of today's final match which determines the final team to the Grand Final Match started on the Compound. As it was a match between the world's strongest 2 teams, it showed a perfect game without losing any expectations of their fans. From the beginning of the game, they showed their desperation not to lose any tension to each their opponent and BaiSha Gaimng successfully managed to win another round and took the first half with a 5-4 score. In the 2nd half, a thrilling game continued as well and both 2 teams continued to play fiercely. BaiSha Gaming showed tremendous concentration till the last minute of each round and eventually won with a score of 10:7 in the 2nd half.

The 2nd set on the Ankara map, Black Dragons began to pressure BaiSha Gaming with their highly offensive strategy from the beginning of the game. BaiSha Gaming failed to lead the momentum and pushed back by Black Dragons. Unlike the 1st set, Black Dragons took the lead with a 6:3 score in the 1st half. Black Dragons started to pressing their opponents without losing concentration until the 2nd half of the game and took the second set with a score of 10:5 and tied the set score 1:1.

The 3rd set was held on the Compound and it was completely different from the previous 2 sets. BaiSha Gaming began to hit the opponent fiercely from the beginning of the 3rd set and led all the early flows by constantly pushing the opponent until the 1st half was finished with a score of 7:1. The phases of the 2nd half was not different. BaiSha Gaming pressured their opponent at a tremendous speed and eventually easily got the 3rd set with a 10:3 score without any major changes.

In the 4th set of the Black Widow which is the most representative map of the CROSSFIRE, both teams showed similar skills and makes the game really heated up. BaiSha Gaming managed to game hardly and finished the 1st half with a 5-4 score. However, in the 2nd half, the sleeping Black Dragons began to wake up. They began to launch a huge attack on BaiSha Gaming without any concessions and eventually finished the 2nd half with a score of 10:7 to win the 4th set.

The final 5th set took place on the Port map. Black Dragons failed to penetrate BaiSha Gaming's strong defense from the beginning of the match. BaiSha Gaming took the 1st half with a score of 8:2. In next half, they continued their fierce momentum and took a step closer to victory with fierce attacks in the 2nd half. Eventually, BaiSha Gaming advanced to the finals with a score of 10:3.

Finally, now we only have 1 day left to decide the CROSSFIRE world champion in this year.
Who will be the winner with honor of the champion among the 8 outstanding teams in the world?

Please join with us to our last journey of the CFS 2021 Grand Finals. 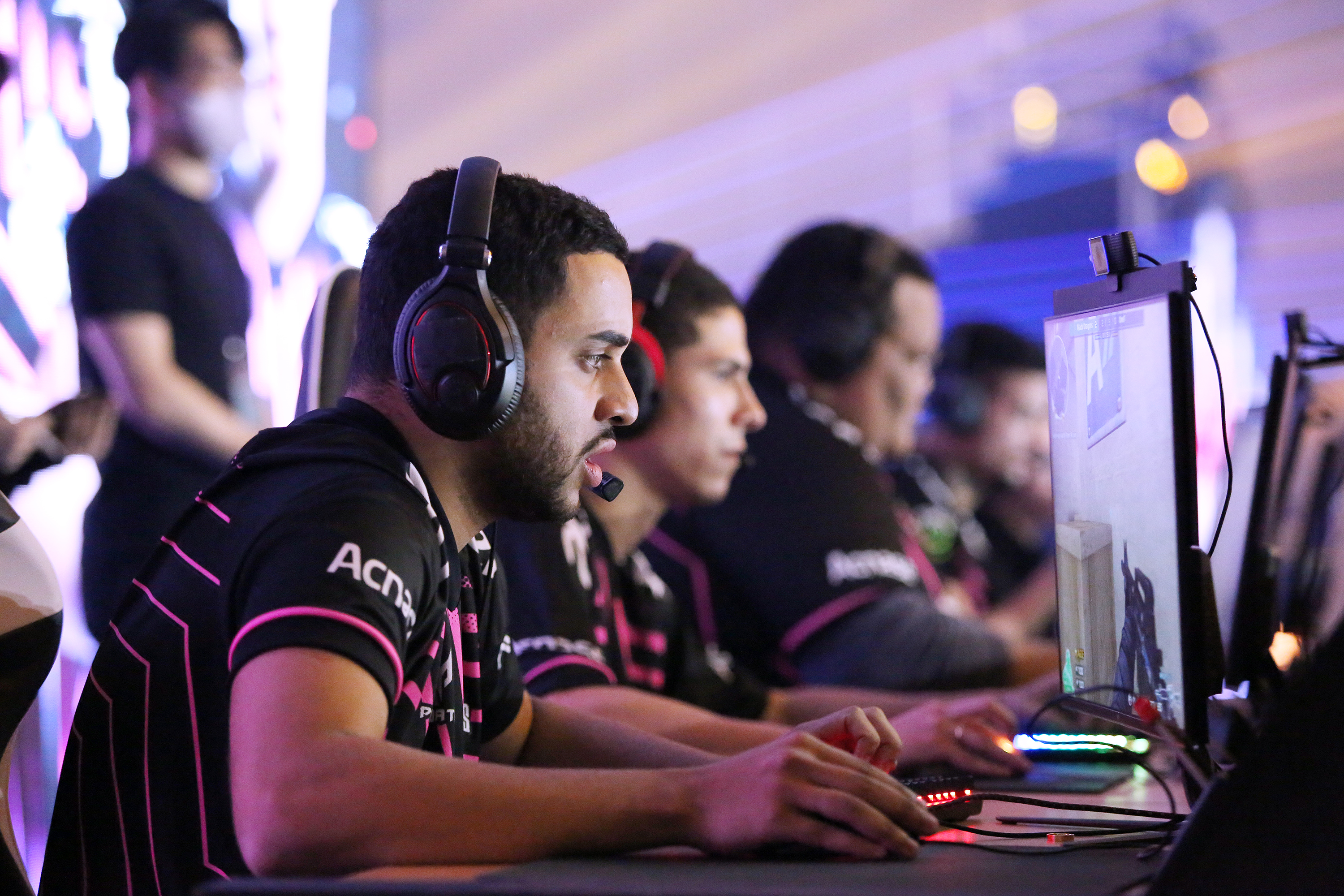 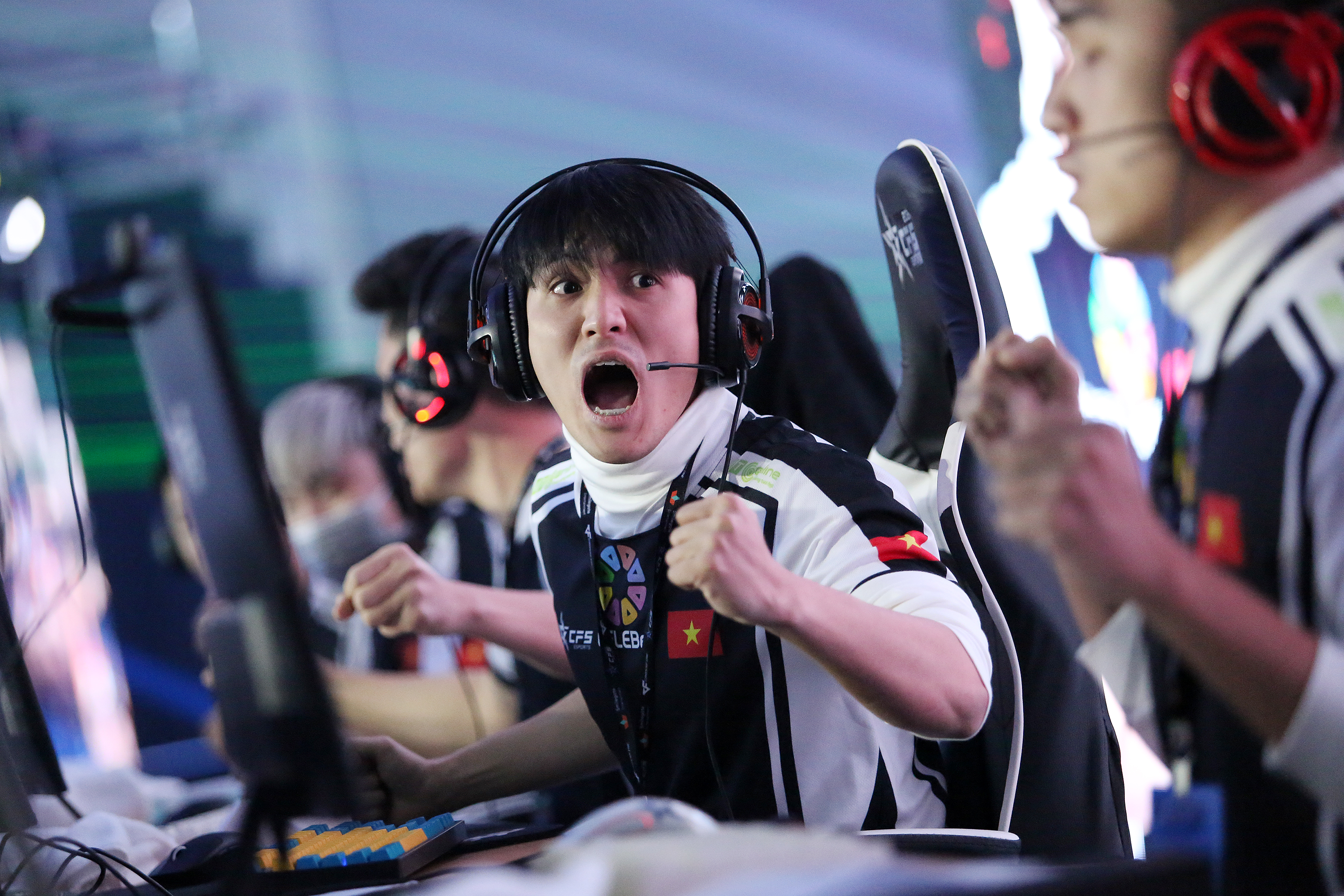