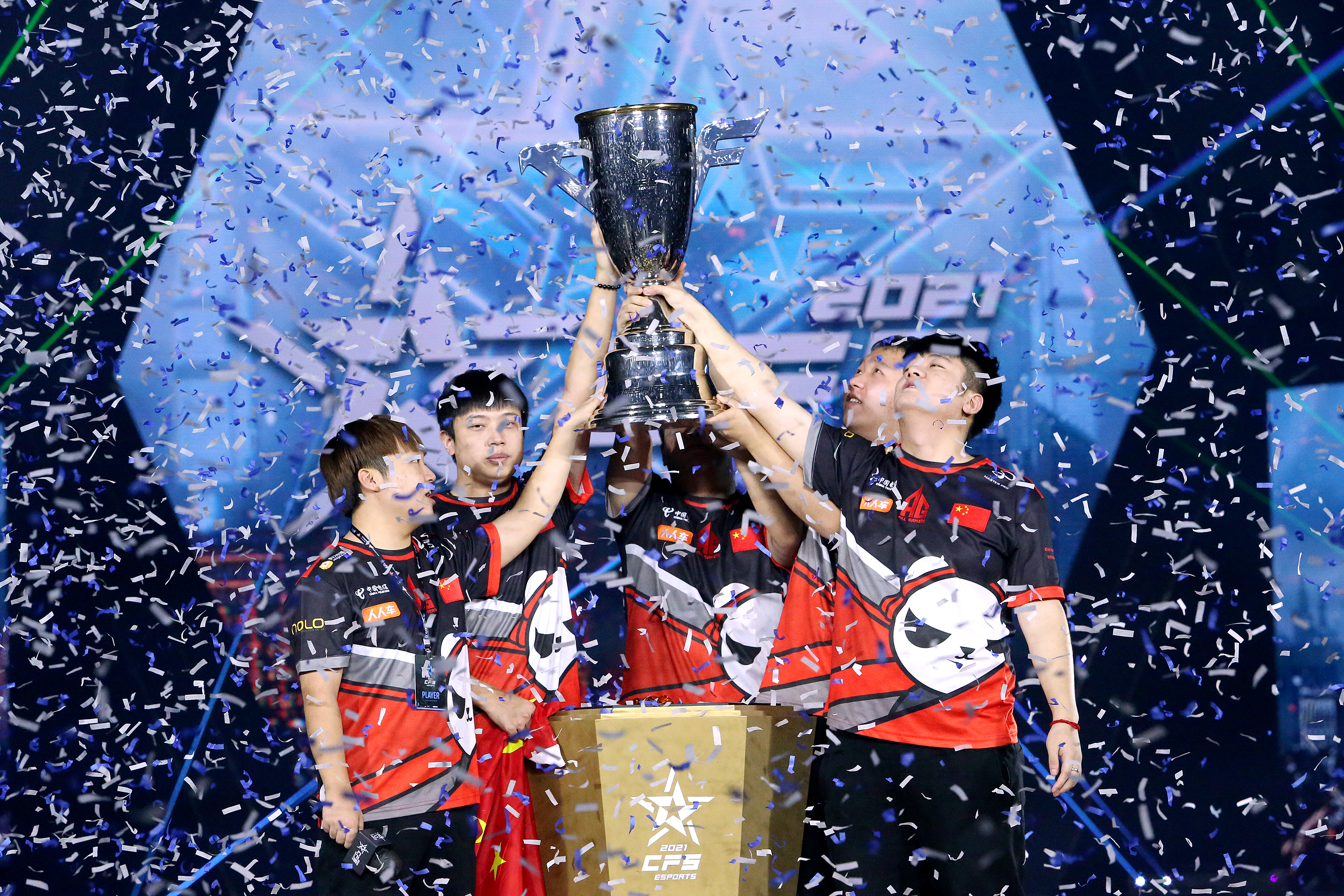 “CROSSFIRE World Champion from CFS 2021 Grand Finals is ALL GAMERS".

On the 5th day of the competition which is the final journey of all CFS 2021 Grand Finals is ended today. 3rd and 4th place match and also the grand final match, both 2 grand matches are finally finished with decorated the grand finale of the whole tournament and made the great climax by 8 teams.

Below, we will learn more about how each game went through each team's game scores and MVP information of each game. 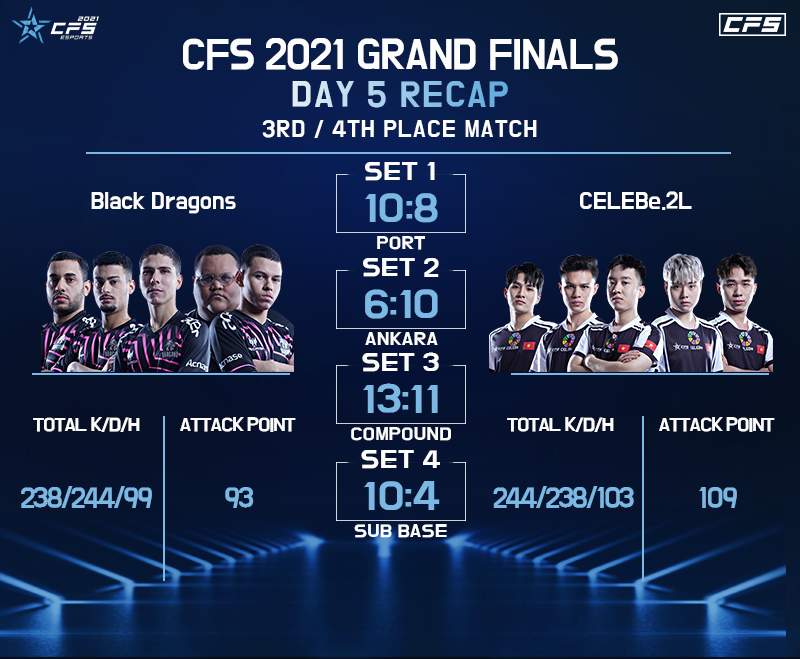 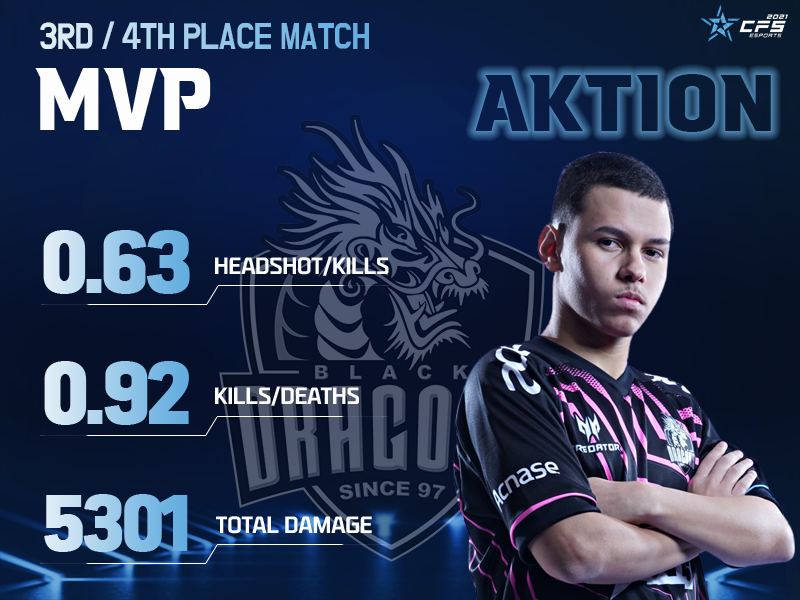 The 3rd and 4th place matches was took place on the Port. Both teams showed their endless passion and concentration for 3rd place during the whole match. CELEBe.2L initiated fierce attack from the start. At first glance, CELEBe.2L seemed to take the momentum of victory, but Black Dragons quickly changed their tactics and began to reverse the phase. After a fierce battle between the 2 teams in Port, Black Dragons took the 1st half with a score of 5:4. 2 teams played really tight same as in the 2nd half, but quick and smart attack from Black Dragons was hard to stop. In the end, Black Dragons took the 2nd half with a score of 10:8 and confirm their victory in the 1st set.

The 2nd set in Ankara is the place where CELEBE.2L has gained their great momentum. Black Dragons finished the 1st half with a score of 7:2 without even trying hard to attack from the start. But CELEBe.2L didn’t lose their concentration till their end and took the 2nd set with a 10:6 score under tactical pressure and created a 1:1 tie situation.

In the 3rd set which started on the Compound, both teams showed their similar skills. But CELEBe.2L took the 1st half with a 5:4 score even the highly pressured attack by their opponent. Black Dragons started to losing their tempo in the 2nd half, but they showed meticulous tactics and suddenly situation had change totally. In the end, the match went into extra rounds and Black Dragons attacked with high speed and eventually win the overtime round with a score of 13:11.

The 4th set was held on the Sub Base. In the first few rounds, the Black Dragons continued to have an advantage but soon CELEBe.2L broke through the iron fence and began to attack. After a fierce battle between both teams, Black Dragons managed to take a step ahead with a 5-4 score. Black Dragons dominated the game in the 2nd half and Black Dragons took all rounds without a single round to the victory and finished 3rd set with a score of 10:4. CELEBe.2L achieved 4th place on the stage since came up again in three years, on CFS stage with their greatest performance. 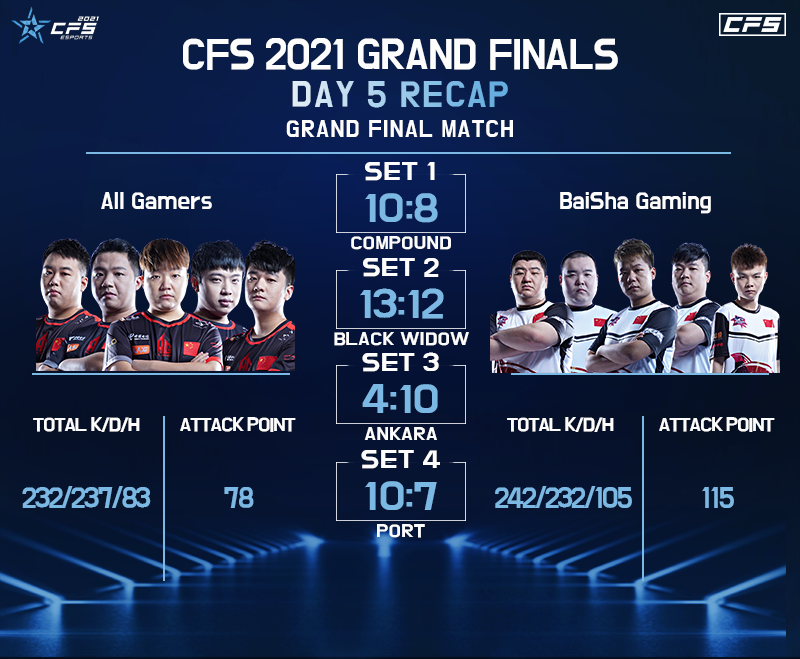 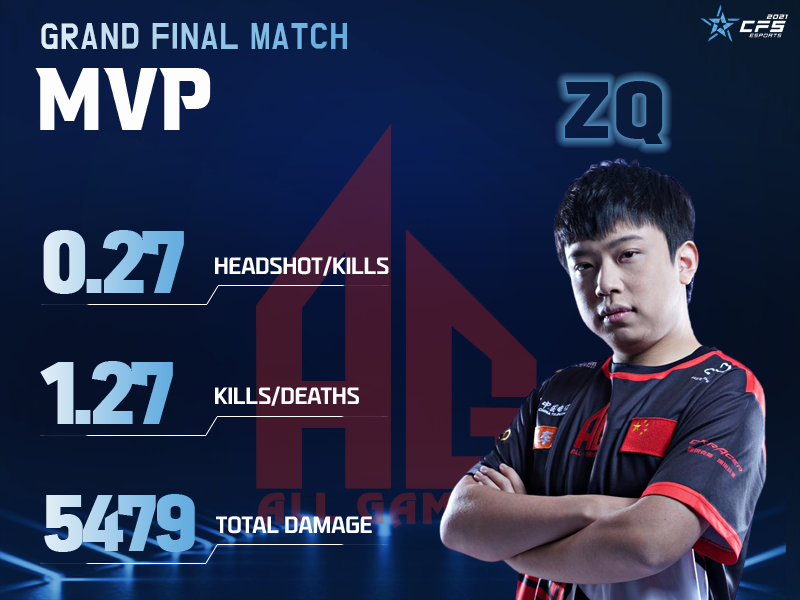 The grand final math of this year was held on Compound, right after the spectacular opening. Both teams continued their games fiercely from the beginning of the match. With all the expectations, All Gamers took the 1st half and slightly lead the 1st set with a score of 5:4. Likewise, All Gamers won all the rounds without a single failure in the defense and won the 1st set with an amazing score of 10:4.

The 2nd set was held on Black Widow. In the 1st half, All Gamers seemed to win with a well prepared offensive play, but BaiSha Gaming followed closely from their tail and barely taking the lead with a 5:4 score. Fierce moments between 2 teams has continued in the next half as well. Both teams are showed their best concentration without a moment of any disruptions and they entered extra rounds. Both teams also deployed the various tactics and excellent shooting skills, but All Gamers showed excellent concentration in the final round and took the second set with 13:12.


CFS 2021 Grand Finals is finally over at here in Incheon, Korea. The long-awaited moment of this year has ended with the new born of CROSSFIRE world champion, ‘All Gamers’ team.

Which teams will show us a greater match for the championship next year?
We, CFS HQ would like to send our warm gratitude to the world CROSSFIRE esports fans who have been with us during the long journey. We hope to see you again next year with another memorable stage and games. 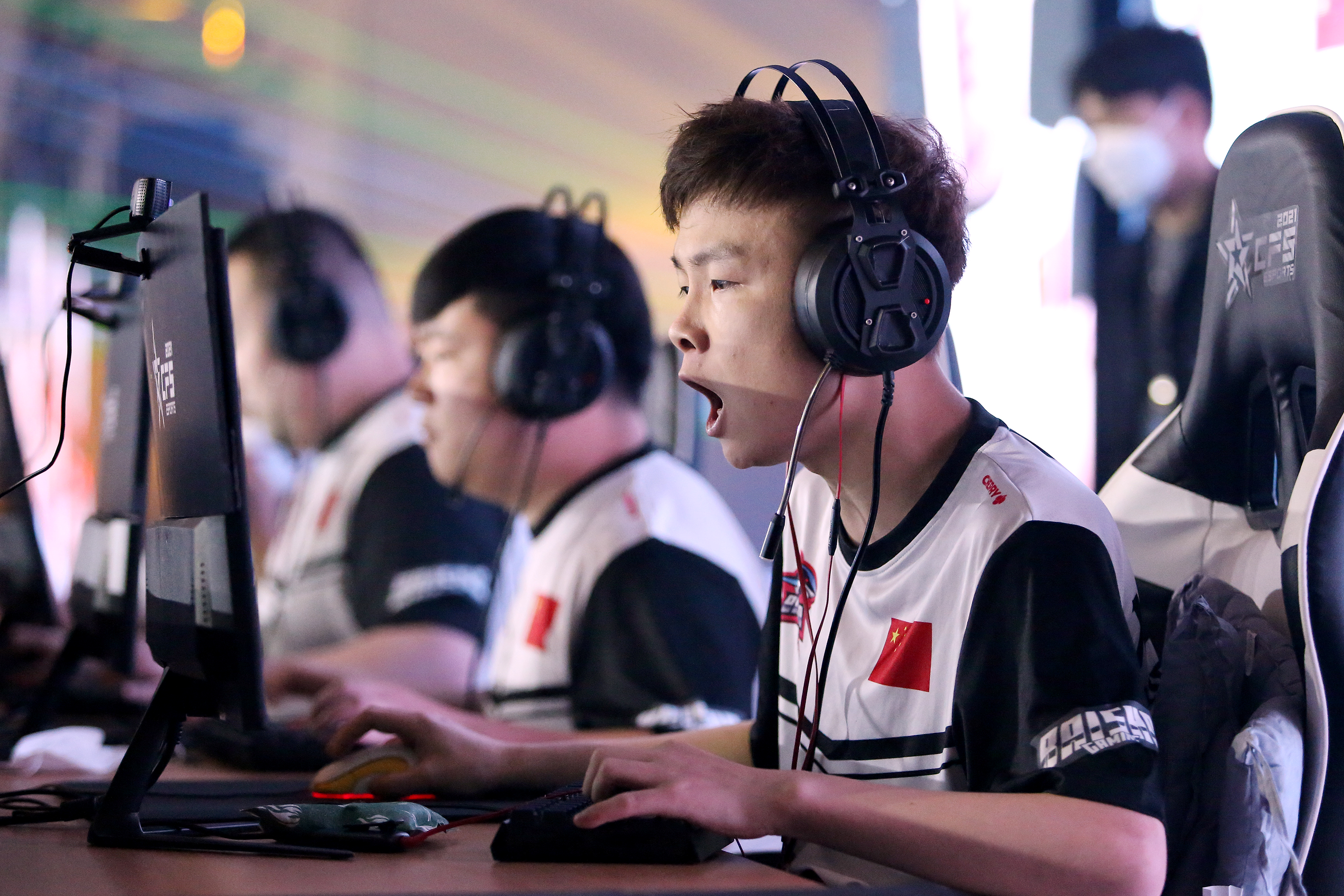 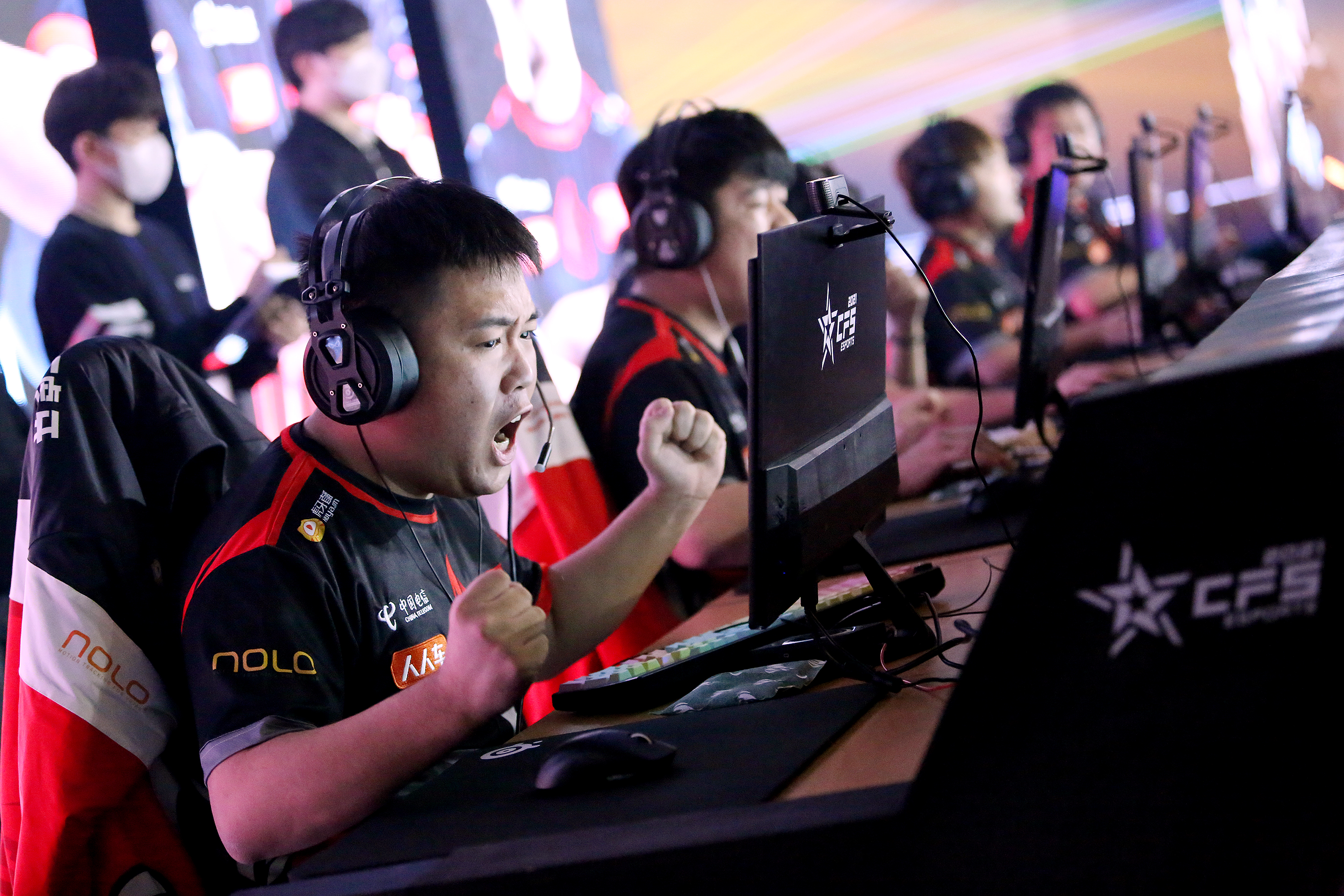